Home > Kids > What Kids Expect From The Internet

What Kids Expect From The Internet 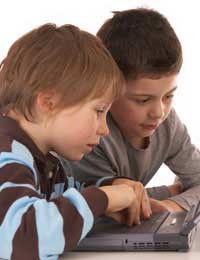 A generation has grown up that doesn’t know life without computers or mobile phones. Today’s teenagers take the power of the Internet with its instant information and communication for granted.

For them there has been no life without video games, satellite TV and all the other things that are great advances – or curses – to older people. They navigate the Internet and all kinds of computer applications without a second thought. They download music, watch video and television online and assume it’s the most normal thing in the world.

They take all the advances in their stride and look forward eagerly to more.

How Kids Adjust To New Technology

For many kids, the Internet has a life of its own. They interact with friends on social networking sites, instant message them, e-mail music tracks and videos and play multi-player video games like World of Warcraft – often all at the same time.

Multi-tasking – doing several things at once – has become a natural way of life for kids, which can be both a good and a bad thing. It’s excellent to have strong command of many jobs at the same time, but it also betokens something that’s become more endemic since the 1980s – the short attention span.

Of course, many can focus on a single thing for long periods, but in general attention is now in small chunks or bursts. There are even schools that now teach in eight-minute bursts, followed by exercise, since they’ve determined kids need a break after that time. So is the future of double periods of history or maths doomed?

But even though some believe kids have lost the power to focus for long periods, they do have a remarkable capacity to understand new technology. They might not grasp the science behind it, but they can quickly figure out how to make it work. You might not have been able to programme your VCR – an appliance now consigned to history by the DVD player and recorder – but give a kid just a few minutes and they have it working smoothly and easily.

They’re not stuck in the same rut as adults, they’re not scared of technology. To them, it’s another toy, albeit a more grown-up one, and they’re eager to see what they can make it do; they’re fearless.

Kids And The Internet

It’s all very well kids being fearless about technology itself, but that naïveté can also be dangerous. Without the knowledge of the world, it leaves them more open to predators online, especially among younger kids. Research has shown that 25% of kids have physically met someone they first met on the Internet.

By nature, kids are trusting. They’ll talk to people in chat rooms, and give away personal details. In most cases that’s no problem – they’re talking to other kids – but sometimes it’s dangerous.

They expect a lot, indeed they expect everything, from the Internet, but one thing it can’t deliver is safety, and that’s something a parent can drum into them. Of course, to do that, you need to be aware of those dangers in order to help your kids avoid them. The online world is a lawless place in many ways, but kids who’ve been online since they began school pay it little mind. The Internet is a familiar world to them, at least until danger rears its head. The more we educate them about the problems, as well as the good things, the safer they’ll be.

There’s a great deal to be gained from the Internet, and kids seem to understand innately how to use it – even if destinations like Wikipedia have replaced hunting through the library as research for homework. As we harness the possibilities of the Internet and other new technologies, the new generations that come along will use them to the full.